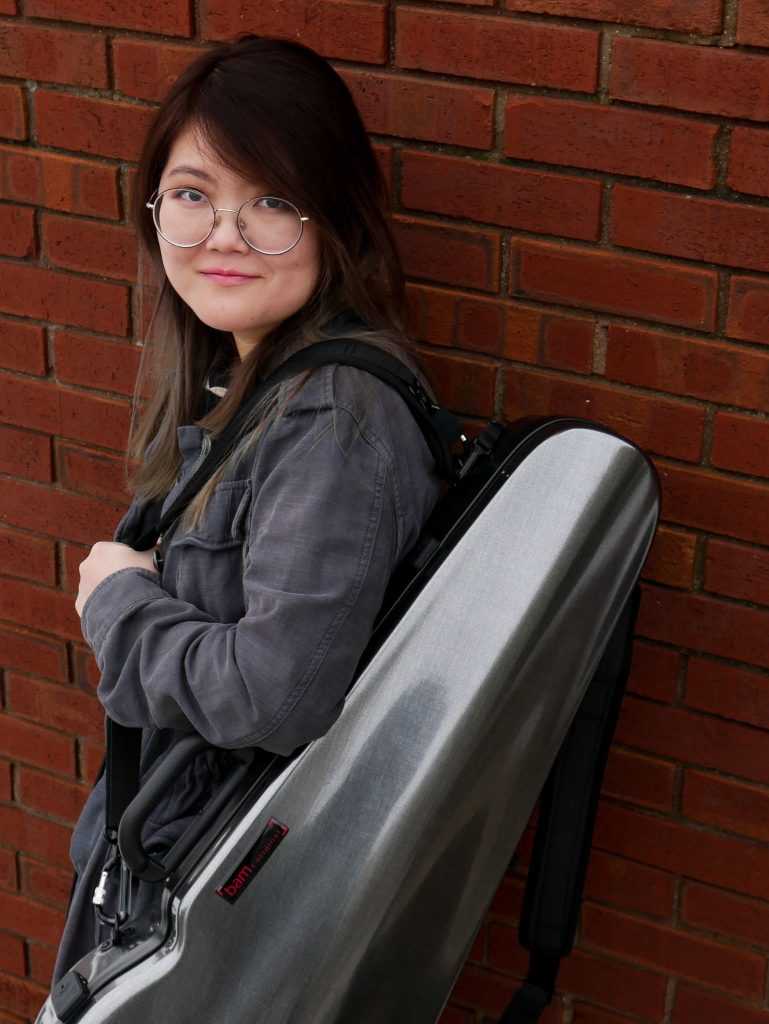 Elsie is finishing up her year at the University of Illinois Urbana-Champaign (UIUC) pursuing a BM in Viola Performance, BA in Music + Composition, and a Spanish minor. This past fall, she applied to Master’s programs in Viola Performance and Literature and will be attending Boston Conservatory in August.

In addition to performing, Elsie teaches private lessons, plays in local community orchestras, and composes. Currently, Elise is getting into running, cooking, reading, embroidery, and plays electric bass in an indie-folk band called Lucky Penny. She is also a proud mother of five plants and hopes to continue extending the family in the future.

I think the most important thing to me is my support network. I have so many friends and family members that have supported my journey pursing music and value each and everyone of those relationships. Choosing to pursue my passion was a very difficult decision to make but I know it was the right decision because of all the lovely people in my life. I definitely would not have had the strength or energy to do it without those people.

The next think on that list for me is education. Knowledge and information are such game changers for young people and (after being in the music education track for two and a half years), I know that it is not being emphasized enough in the public-school setting. It is so easily forgotten that information is power and that it is indeed a commodity. I often look back at my time at Countryside and am so incredibly thankful for the ways that it set me up to have the appreciation and love for education.

CDS gave me a passionate and unstoppable love for learning. It is something that I think about often and credit CDS for. This passion for learning really seeps into everything I do and inspires me to always be looking for more and to never by satisfied too easily. The way that CDS frames information in such an approachable, and exploration-based way continues to shape the way that I learn today, and I will forever be grateful for that. It’s something that I realized recently not everyone has. I think a lot of people do not realize how much of a commodity knowledge is and how inaccessible it is at times. CDS definitely taught me to never take that for granted and to continue to learn beyond what is expected or necessary.

On a similar note, I trace my ambition back to CDS. I think that Countryside pushes their students to be passionate and ambitious about what they care about. I never felt that I was limited in any way at CDS. There is an incredible amount of love and support that is shown from teachers to students that is then mirrored between the students. It is genuine and unbelievable. At the same time, there really is not very much hand holding. Teachers expect a great deal out of the students and it really shows how much they trust the teachers have for the children there.

The CDS Mission isn’t something I think about actively. It’s not something that I recite often with pride, as I did when I was a student at CDS. I think that the mission of respect, responsibility, and resourcefulness has just become a part of me. It’s this last third of the mission that has made the most impact on my life. Everyone at some point during their lives learn respect and responsibility through any education system. It’s this third characteristic of resourcefulness that I think has really given me an edge as a young adult. It’s this final part of the puzzle that makes me a capable human being, someone that is able to make dreams a reality. If I was able to set up a fund raiser in fifth grade with four other fifth graders and account for every single cent during the process, I can finish this research paper or get into graduate school or whatever else I set my mind to. It’s an incredible feeling to know that I am capable, and I owe that to my time at CDS.

Something that is so special in the CDS experience is the community that exists there. Although I may feel a little awkward about it, I know that I could reach out to several of my classmates from way back when because of the strong, family-like community that Countryside has. There are plenty of people, colleagues and parents alike, that I know are supporting me from close and afar that I can directly trace back to my days at CDS.

Another thing that really defines the CDS experience would be the appreciation of each and every subject. Students truly are given the time and space to explore different interests which is what I think education programs could spare to do more of. It allows children to build up critical skills of decision making, time management, and self-motivation that are not typically expected of young people. This lack of subject hierarchy also allows students to approach education without the fear of failure.

What colleges/universities did you get accepted to?

For Undergraduate studies, I was accepted to Lawrence University and the University of Illinois. Both were for their BME programs in Music Education.

For Master’s programs, I was accepted to Iowa University, Boston Conservatory, Mannes School of Music (The New School), and Stony Brook University.