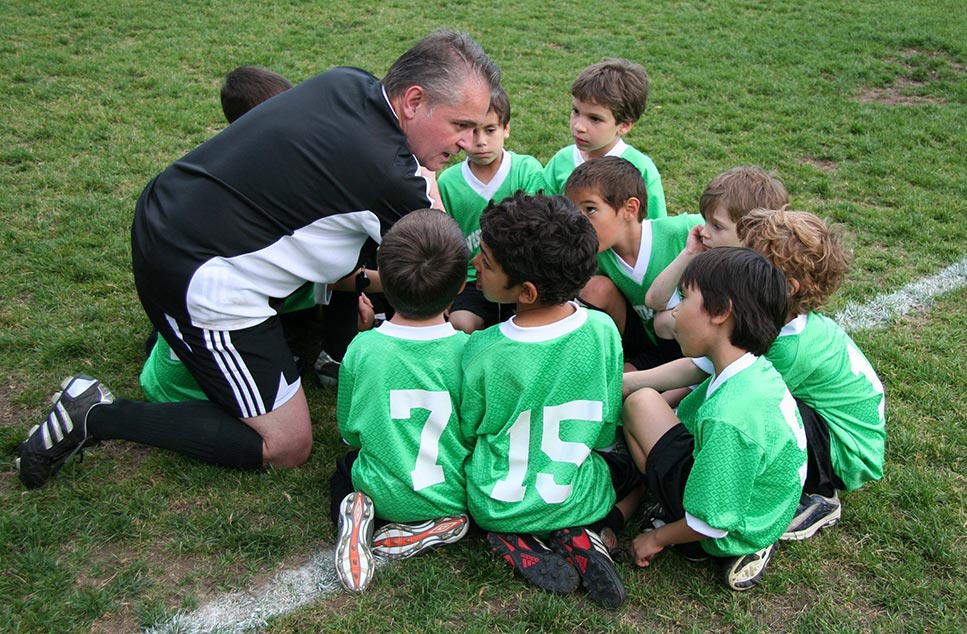 In the years before soccer became one of the most popular sports for kids in the United States, my father coached high school boys.  He had played and coached football for years, but the politics spoiled the fun.  Soccer was a nerd sport – a few teams of kids too puny to play football, too short for basketball.  My dad loved it.

He was the type of coach who never lost his cool.  He commanded the respect of his team, steered clear of conflict with parents, maintained his deadpan sarcastic perspective on life.  All who knew him considered my dad to be smart, strong, unflappable and hilarious.

My two younger sisters and I loved to watch him coach.  In the early years of his long coaching career his team often lost,  but we were too young to understand competition, too happy to care.  Nothing about his attitude before or after the game altered our gaiety.  He walked away from every game with the same even stride.

When his team got trounced, his comment was predictable.  “Well girls, that was a real character-builder.”

My dad did not enjoy losing.  Nobody does.  He did understand that loss is a powerful motivator.  Teams that are losing are usually also improving.  A good coach can show a losing team the value of hard work.

My dad’s team started winning state championships and he moved on.  The politics spoiled the fun.

My dad started his career teaching high school American history.  He later earned a second master’s degree in counseling and began working in cooperative education.  For a portion of every teaching day, my dad guided troubled adolescents into income-earning jobs.  The kids worked to complete their graduation requirements half the day, and spent the second half of the day working. It was a controversial program, but it saved lives.

At that time my dad would take us through the drive-through windows at the fast food restaurants where some of his students were employed.  When we stopped at the place-your-order screen, my father was a tyrant.

The young, static voice on the microphone always offered the day’s special. “Could I interest you in one of our new double-deluxe burgers?”

My dad would hang his head out the open window and holler, “If I want a burger, I’ll ask for one!”

“Hey, Mr. Smith?! How’s it goin’? Pull forward. ”  The teenagers at the other end of the microphone couldn’t see his face, but they recognized my dad’s voice, enjoyed his rant, understood he cared about character.

A few weeks ago, my third-grade son’s undefeated soccer team lost in the last game of their season, by one point.  They played hard, never gave up, encouraged each other, and lost.

They had been coached to lose with courage, to walk away from every game tired but proud.  At the end of the game, one of the boys reminded his teammates that they remained “best buddies.”

“Everybody who cares about us is over there,” he said, pointing at the sidelines.  “They are smiling.  So I think we can, too.”

My dad was on the sidelines, the grandpa who rarely missed a game. He too was smiling.  He shook his fist in they air, “Fifth quarter!!”  He shouted.

Another season ended; another generation on the field; another reminder that for my father, character is as often revealed in loss as it is in victory.