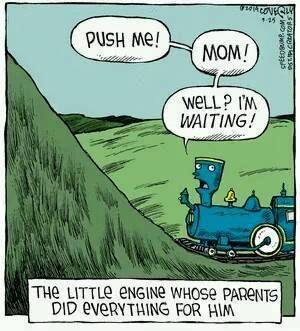 The theory goes something like this: if you use legal drugs such as tobacco or alcohol, or even what some consider “soft drugs” like marijuana, you are more likely to slip down the slope to using “hard drugs” like amphetamines, cocaine and heroin, than people who never get started using soft drugs in the first place. The starter drugs are often referred to as gateway drugs because use of them is seen as the first step through the gateway to even more dangerous behaviors.

But this is not an essay about drug use. Nor is it about some of the bad choices young people make. Rather it is a veteran educator’s ruminations about 21st century parenting – or what I call, Gateway Parenting.

To my knowledge, the words gateway and parenting have not been paired together. But parenting a young child is rife with opportunity to make troublesome choices that seem harmless at the time, notwithstanding the nagging feeling that something is amiss. And much like that only-­‐experimental, peer-­‐pressure-­‐initiated, totally-­‐innocent first puff of a cigarette, oftentimes it leads to more.

So what does Gateway Parenting look like? Does it start with something like you throwing your coat over every puddle so your child doesn’t have to get his feet wet? Or making four different dinners each night before you find one she is willing to eat? Unfortunately not. I say unfortunately because if it started with ridiculous acts such as these, few of us would be guilty. That would be akin to starting out on heroin.

This is what the slippery slope actually looks like. More often it starts with something like this: “Let me help you cut that.” “Sure you can have a bagel while we walk through the grocery store.” “How was school today? Were all of the children nice to you?” “I will tell Grandma you don’t like chicken.” “She was just misbehaving because she had so much sugar.” Or gluten. Or because the other children excluded her. Or the teacher is impatient. Or she fell off her bike earlier in the day.

Listen up. Those are the sounds of your first puffs.

As you read the article, if you are like most parents, you will irrationally assume the article is about you. Not because it is, but because we all participate in these activities at one time or another. And more often than not, thankfully, we see our children in some setting independent of our homes, and we realize that they are capable of much more than we are asking of them. We realize that we are spoiling them, to borrow an old fashioned word. Some of us, however, will continue on to the hard drugs. Some of us, too many I am afraid, are doomed to the life of a junkie. Stressed out and strung out and sure that if we do it one just more time, we promise it will be the last.

Perhaps you have heard horror stories in recent years about parents who show up to job interviews with their children. Or call college professors about a grade on a term paper. Or call their children’s employers about better pay or benefits.

How does that happen?

It goes from having a sippy cup in the car so the children won’t get too thirsty on the seven minute ride home, to carrying their backpacks for them, to dropping off the lunch they forgot in the car, to the quick conversation with the teacher to inform her that she is not handling the social struggle in her class quite fairly, to calling him out of school because he had a lot of homework the night before and worked really hard to get it done, to a quick call to the English professor. Just this once.

And therein lies the real danger of Gateway Parenting. Like many drugs, it is addictive. We all swear we can stop, we just don’t want to. Parenting language equivalent: “I will stop when she is a little older. She’s just a kid. It will be easier later when she can better understand why.” Except it won’t be easier later. It will only get harder. As you continue to intervene, the opportunities for your child to build his skills to manage challenges are passing him by. And with the loss of those opportunities goes the loss of his skills. He doesn’t get any better at solving problems and facing challenges. He gets older, but the problems just get harder and the consequences more dire. And he seems to always be one step behind. And you feel forced to always stay one step ahead.

So what to do? Just say no. No to alternative dinner choices. No to skipping soccer practice because it is raining. No to calling the teacher to let her know that your son would like her to tell Janie that she is hurting his feelings. No to extra allowance. No to driving her to her friend’s house three blocks away instead of having her walk. No to helping with homework. Say no. There is no substitute. There is no workaround.

And when you do try to give up Gateway Parenting, be prepared, your children will make it hard. Your neighbors will make it even harder. And the nanny will make it darn near impossible. Beware, I tell you, the rate of recidivism is high.

The first part of the struggle will be to recognize when you are doing it.

Many suggest that you think of your child’s life as a path. Every day you will face choices that present two options. You can prepare the path for

your child by removing the big rocks, the medium stones, and even

every little pebble. Or you can prepare your child for the path by letting

him face as many challenges as you can stand. This isn’t easy parenting,

but it is good parenting. And though it won’t always feel

very good for you, it will make your child’s life a whole lot easier.

As always a well written and thought provoking article. So grateful for these snippets of what I call “the parent handbook children should come with”. Another great chapter to add to the book. Thanks for these!